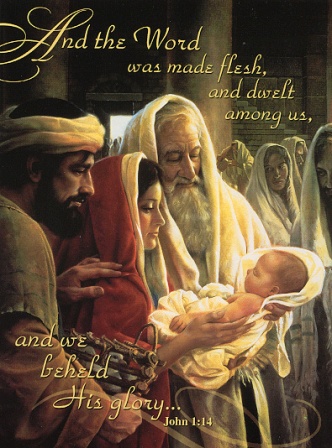 The Word Made Flesh

The Gospel of John does not have an Infancy narrative as do the Gospels of Matthew and Luke. Rather, John speaks of a time before the birth of the Christ Child. He writes of the One who pre-existed the world and was the very agent of all creation:

The reading from Hebrews echoes this same theme:

Long ago God spoke to our ancestors in many and various ways by the prophets, but in these last days he has spoken to us by a Son, whom he appointed heir of all things, through whom he also created the worlds. He is the reflection of God’s glory and the exact imprint of God’s very being, and he sustains all things by his powerful word. When he had made purification for sins, he sat down at the right hand of the Majesty on high, having become as much superior to angels as the name he has inherited is more excellent than theirs.  (Hebrews 1:1-4)

Do we know Jesus beyond the babe wrapped in swaddling clothes? Many of His own Jewish people did not comprehend who he was:

He was in the world, and the world came into being through him; yet the world did not know him. He came to what was his own, and his own people did not accept him.  (John 1:10-11)

The remarkable thing is that the creator God entered the world of His own creation on our behalf. In Jesus, God made himself vulnerable to humankind in order to reveal his true nature and heart. Those who believe in him are given that same nature and heart:

As children of God we are empowered to live as Jesus lived on this earth. We cannot do it on our own. The good news is that Jesus remains with us:

The Word became flesh and made his dwelling among us. We have seen his glory, the glory of the one and only Son, who came from the Father, full of grace and truth.  (John 1:14)

As prophesied by Isaiah, God has revealed his gift of salvation to the whole world:

The Lord has made bare His holy arm
In the eyes of all the nations;
And all the ends of the earth shall see
The salvation of our God.   (Isaiah 52:10)

God made himself visible that all the world might see his glory. However, we are now living in an ever darkening world. It has become incorrect to celebrate the birth of Christ. We are not to pray in our schools. We are told not to give a testimony. Jesus must be folded into other religions in order to be acceptable. Why is that?

The world wants us to hide the glory of God and his plan for salvation. That is because they are hiding from God. They know he sees their sin, but they do not want to admit their sin. Are we to hide from God as well?

Now is the time for what may be the greatest missionary work of all. Are we up to the task? We are not alone in carrying out this mission. God is Emmanuel. In the Incarnation, God took on our flesh. He is with us in our struggles. God became flesh for us so that we might become part of his Spirit. Let us join him in newness of life. The Apostle wrote:

So if anyone is in Christ, there is a new creation: everything old has passed away; see, everything has become new!

And let us proclaim the greatest message of all. Let us celebrate the Incarnation of God. God joined us and he is among us. He is on our side and our salvation is secure in him. Thanks be to God who gives us the victory through our LORD JESUS CHRIST.