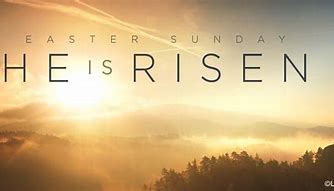 A New Heaven and a New Earth

From the Gospel of John we have this wonderful account of the first witness to the resurrection of Jesus:

Mary stood weeping outside the tomb. As she wept, she bent over to look into the tomb; and she saw two angels in white, sitting where the body of Jesus had been lying, one at the head and the other at the feet. They said to her, “Woman, why are you weeping?” She said to them, “They have taken away my Lord, and I do not know where they have laid him.” When she had said this, she turned around and saw Jesus standing there, but she did not know that it was Jesus. Jesus said to her, “Woman, why are you weeping? Whom are you looking for?” Supposing him to be the gardener, she said to him, “Sir, if you have carried him away, tell me where you have laid him, and I will take him away.” Jesus said to her, “Mary!” She turned and said to him in Hebrew, “Rabbouni!” (which means Teacher). Jesus said to her, “Do not hold on to me, because I have not yet ascended to the Father. But go to my brothers and say to them, `I am ascending to my Father and your Father, to my God and your God.'” Mary Magdalene went and announced to the disciples, “I have seen the Lord”; and she told them that he had said these things to her.   (John 20:11-18)

It was fitting that Mary Magdalene, whom Jesus had cast out seven demons, was the first witness to the resurrected. (Luke 8:2). Jesus said:

“But go and learn what this means: ‘I desire mercy and not sacrifice.’ For I did not come to call the righteous, but sinners, to repentance.”   (Matthew 9:13)

Mary was faithful to Jesus when many of his disciples deserted him. She had come to his tomb early in the first day of the week. She was not prepared for what she saw. She had a close relationship with Jesus. But he had changed. She did not recognize Jesus at first. When he spoke to her she wanted to reach out to him. Jesus, then said a curious thing: “Do not hold on to me, because I have not yet ascended to the Father.”

What did this mean? Something remarkable happened to change the whole world. Jesus had risen from the dead. He was not the same as before. He had a glorified body. And his mission had changed. He needed to ascend to the Father before he could meet again with his disciples.  Even his disciples would not be able to hold on to the Jesus they knew.

Jesus had changed. The whole world was about to change. God spoke through the Prophet Isaiah:

For I am about to create new heavens
and a new earth;
the former things shall not be remembered
or come to mind.
But be glad and rejoice forever
in what I am creating;
for I am about to create Jerusalem as a joy,
and its people as a delight.
I will rejoice in Jerusalem,
and delight in my people;
no more shall the sound of weeping be heard in it,
or the cry of distress.
No more shall there be in it
an infant that lives but a few days,
or an old person who does not live out a lifetime;
for one who dies at a hundred years will be considered a youth,
and one who falls short of a hundred will be considered accursed.   (Isaiah 65:17-20)

This surely does not sound like the world we live in now. We will never live in any utopia in this current world. God is preparing a new world, a new earth, a new heaven. We are destined to be a part of it. But we must choose to enter.

Open for me the gates of righteousness;
I will enter them;
I will offer thanks to the Lord.

“This is the gate of the Lord;
he who is righteous may enter.”

I will give thanks to you, for you answered me
and have become my salvation.

The same stone which the builders rejected
has become the chief cornerstone.

This is the Lord‘s doing,
and it is marvelous in our eyes.

On the day of the resurrection Jesus opened the gates of righteousness. The righteous may enter but they must enter through the gate that God has provided.

I am the gate. Whoever enters by me will be saved, and will come in and go out and find pasture.   (John 10:9)

Our salvation comes through faith in the saving power of the cross. The Apostle Peter preached:

All the prophets testify about him that everyone who believes in him receives forgiveness of sins through his name.”   (Acts 10:39-43)

The message of the resurrection of is that the lives of all who believe have been changed. Not only that, but a whole new world awaits us, the Millennial Reign of the Lord Jesus Christ. We must no longer live as though we are a part of this world. This world is passing away. The Apostle John wrote in his Epistle:

Today, like Mary Magdalene. Jesus is calling each of us by name. He is telling us not to hold on to the past. This world is passing away. Walk through the gate that leads to a whole new world.