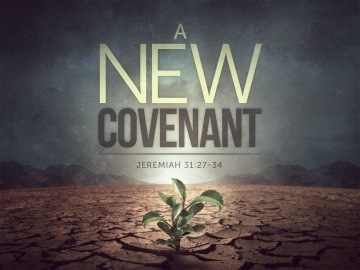 Track 1: God So Loved the World

Israel had a covenant with God. established through Abraham, Isaac, and Jacob. God set Israel apart as nation to. bless them and use them to bless all nations. But the people did not keep covenant with God. They refused to obey his commandments.

The days are surely coming, says the Lord, when I will make a new covenant with the house of Israel and the house of Judah. It will not be like the covenant that I made with their ancestors when I took them by the hand to bring them out of the land of Egypt– a covenant that they broke, though I was their husband, says the Lord. But this is the covenant that I will make with the house of Israel after those days, says the Lord: I will put my law within them, and I will write it on their hearts; and I will be their God, and they shall be my people. No longer shall they teach one another, or say to each other, “Know the Lord,” for they shall all know me, from the least of them to the greatest, says the Lord; for I will forgive their iniquity, and remember their sin no more.   (Jeremiah 31:31-34)

Israel was unable to keep covenant with God. He set them apart as a missionary nation, but they failed to keep his commandments. So God went the distance for them. He satisfied the righteous requirement of the old covenant though his Son Jesus Christ through his death on the cross.. He did for them what they could not do. He offed a new covenant fto them freely, though at great cost to himself. All they had to do was believe in this new covenant.

But the Pharisees and religious refused to accept Jesus or believe on him. Why? Perhaps they did not want to be under his yoke. Jesus said:

“Come to me, all you who are weary and are carrying heavy burdens, and I will give you rest. Take my yoke upon you, and learn from me, for I am gentle and humble in heart, and you will find rest for your souls. For my yoke is easy, and my burden is light.”   (Matthew 11:28-30)

They did not want to enter the rest of Jesus. The psalmist wrote:

Why do the nations conspire
and the peoples plot in vain?
The kings of the earth set themselves,
and the rulers take counsel together,
against the Lord and his anointed, saying,
“Let us burst their bonds apart
and cast their cords from us.”   (Psalm 2:1-3)

The leadership wanted to be in charge rather than God. Have we changed any today? God offers us the same covenant as Israel, through our faith in Christ Jesus:

“For God so loved the world that he gave his only Son, so that everyone who believes in him may not perish but may have eternal life. ”  (John 3:16)

Yet many people reject Jesus. Even some churchgoers reject that Jesus has paid the price for all of our sins. Apparently they need credit for their good works. We have all sinned. “Good works” does not buy us anything. If we accept the New Covenant God offers us we must do so through repentance. We must acknowledge our sins. The Pharisees refused to do that.

What is the bottom line? Do we want to praise God and thank God for what he has done. Or, do we want to be God and take the place of God? That is not just Satan tempting us. That is often our flesh getting in the way as well.

God wants to write his law on our hearts. All we need to do is to allow him. That is the good news of the Gospel. Otherwise we are doomed.

“Indeed, God did not send the Son into the world to condemn the world but in order that the world might be saved through him. Those who believe in him are not condemned, but those who do not believe are condemned already because they have not believed in the name of the only Son of God.   (John 3:17-18)

Track 2: Striving with God and Man

How many of us have realized that life is a struggle? I surely have, as I am sure that is true for most of us. It wa certainly true for Jacob. He had stolen his brothers Esau’s birth right and fled to his Uncle Laben when he realized that his brother had planned to kill him. He suffered working under his uncle, who tricked to marrying his older daughter when Jacob wanted to marry the younger. Laban also robbed him of his of his full wages. He was now returning home, having to faee his older brother Esau. He was in a state of crisis.

The same night Jacob got up and took his two wives, his two maids, and his eleven children, and crossed the ford of the Jabbok. He took them and sent them across the stream, and likewise everything that he had. Jacob was left alone; and a man wrestled with him until daybreak. When the man saw that he did not prevail against Jacob, he struck him on the hip socket; and Jacob’s hip was put out of joint as he wrestled with him. Then he said, “Let me go, for the day is breaking.” But Jacob said, “I will not let you go, unless you bless me.” So he said to him, “What is your name?” And he said, “Jacob.” Then the man said, “You shall no longer be called Jacob, but Israel, for you have striven with God and with humans, and have prevailed.”

Jacob had striven with God and man. That may sound strange to us at first. But does that also apply to us? Life can be difficult. We have to deal with difficult people. God allows such difficulties. He allow us to experience things that we, alone, cannot comprehend or resolve. We remember the grave difficulties that Job experienced. He certainly wrestled with God about them. God puts us in places and positions where we have to call upon him for help. Most of us will not experience the trials of Job. But we will experience trials.

O Lord, you have searched me and known me.
You know when I sit down and when I rise up;
you discern my thoughts from far away.
You search out my path and my lying down
and are acquainted with all my ways.
Even before a word is on my tongue,
O Lord, you know it completely.
You hem me in, behind and before,
and lay your hand upon me.   (Psalm 139:1-5)

As we experience trials, God searches our hearts. How do we respond to difficult circumstances?

No testing has overtaken you that is not common to everyone. God is faithful, and he will not let you be tested beyond your strength, but with the testing he will also provide the way out so that you may be able to endure it.   (1 Corinthians 10:13)

Our way out of tests and trials it to call upon God and not go it alone. The psalmist wrote:

God is our defense. He is our protector. Jacob discovered this. He did not walk alone anymore. He walked with a limp, but God was now his strength. The psalmist wrote:

The Lord himself watches over you;
the Lord is your shade at your right hand,

So that the sun shall not strike you by day,
nor the moon by night.

The Lord shall preserve you from all evil;
it is he who shall keep you safe.

The Lord shall watch over your going out and your coming in,
from this time forth for evermore.   (Psalm 121:5-8)

We remember that Jesus, while he was on the earth, experienced conflict, even with his family.  There was the time in his youth that he was in the temple in Jerusalem. His parents were frantic to find him. He was with God the Father, but he had to make some adjustments with his parents. As he did, this was said about him:

Jesus increased in wisdom and in years and in divine and human favor.   (Luke 2)

Certainly, he will be able to help us make any adjustments. All we have to do ask him and believe on his name.