Are You Calling Me?

Matthew was a first century Galilean who collected taxes from the Hebrew people for Herod Antipas, the tetrarch of Galilee. He had become rich because of his trade, though he was despised like all the other tax collectors who worked for Rome. It must not have been an easy decision for Matthew to leave all that he had and follow an unknown itinerant preacher. After all, his call was very early in Jesus’ earthly ministry. He had little idea of what was being asked of him.

As Jesus was walking along, he saw a man called Matthew sitting at the tax booth; and he said to him, “Follow me.” And he got up and followed him. And as he sat at dinner in the house, many tax collectors and sinners came and were sitting with him and his disciples. When the Pharisees saw this, they said to his disciples, “Why does your teacher eat with tax collectors and sinners?” But when he heard this, he said, “Those who are well have no need of a physician, but those who are sick. Go and learn what this means, `I desire mercy, not sacrifice.’ For I have come to call not the righteous but sinners.”  (Matthew 9:9-13)

The Pharisees were gatekeepers. They made the rules and keep scores, not for themselves but for everyone else. That is not what an evangelist does. The evangelist is the one who extends God’s mercy. Judgmental people do not understand evangelism. They may be pious. They may quote scripture. But do they understand the love of God?

Matthew came in contact with the love of Jesus. It changed his whole direction. Are we ready to follow Jesus as Matthew did? Are we ready for a new direction? Do we know the love of God in our hearts? If so, then we will want to share it with others.

In proverbs we read:

Trust in the Lord with all your heart,
And lean not on your own understanding;
In all your ways acknowledge Him,
And He shall direct your paths (Proverbs 3:5-6)

Matthew, the tax collector, could answer the call of God because his heart had been touched. He set aside his agenda for that of the Lord Jesus. He did not know where Jesus would be leading him, but he trusted him nonetheless. Do we trust Jesus? Do we love Jesus? He is calling us to go on a adventure. We may never leave home, but we will see our neighbors in a whole new light. Our joy will be to share the good news of Christ with them and all whom we meet.

Matthew is called the Evangelist because of his Gospel writing. Origen said the first Gospel was written by Matthew. This Gospel was composed in Hebrew near Jerusalem for Hebrew Christians and translated into Greek. His Gospel  emphasized how Jesus fulfilled Old Testament prophecy.

Early Church fathers such as Irenaeus and Clement of Alexandria claim that Matthew preached the Gospel to the Jewish community in Judea, before going to other countries. 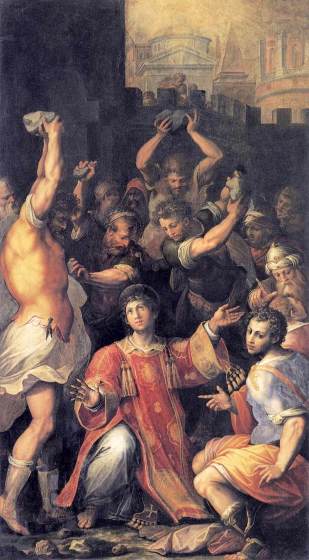 First Martyr for the Faith

For those who refuse to change, the truth of God is unbearable. This has always been true and is still true today. Let us look at some examples. God sent Jeremiah to King Jehoiakim to warn the nation of impending doom if the people did not repent. This is how the people in authority responded to his prophecy:

“Jerusalem, Jerusalem, the city that kills the prophets and stones those who are sent to it! How often have I desired to gather your children together as a hen gathers her brood under her wings, and you were not willing! See, your house is left to you, desolate. For I tell you, you will not see me again until you say, `Blessed is the one who comes in the name of the Lord.'”   (Matthew 23:37-39)

In today’s Epistle lesson we have the example of Stephen:

Stephen, full of grace and power, did great wonders and signs among the people. Then some of those who belonged to the synagogue of the Freedmen (as it was called), Cyrenians, Alexandrians, and others of those from Cilicia and Asia, stood up and argued with Stephen. But they could not withstand the wisdom and the Spirit with which he spoke.   (Acts 6:8-11)

Stephen was not only a servant of the Church as a deacon, he was a powerful purveyor of the Gospel. The leaders could not tolerate the message of Stephen which was by the Holy Spirit. Thus they rejected Stephen. Stephen became the first martyr for the Faith. He was an innocent man full of God’s grace and power, yet he was stoned to death in the name of religion.

People have a certain concept of God. When challenged by God’s truth they often will do anything , including destroying the messenger of God, to keep from hearing and complying with his Word. How far are we willing to go today to reject the Word of God?

Where do we stand today? Are we open to God? Are we seeking his revelation in our lives? Is his Word all important to us? If so, then we will surely be persecuted, even within the Church. When that occurs, will we still hold on to the truth at all costs?

Stephen was a man whom the Word of God was all important to him. He was willing to die for it so that the truth might be told. Not only that, he was able to forgive the very people who were stoning him to death.

We would not have the Church today without the testimony of Stephen and many faithful martyrs for the cause of the Gospel. As in the days of Stephen, we are living in an age hostile to the Gospel, even in America. Will we step up and step out for the Gospel in our day?